How Possible House Speaker Kevin McCarthy, Twitter’s New CEO, And You Must Get The Balance Of Consequences Right 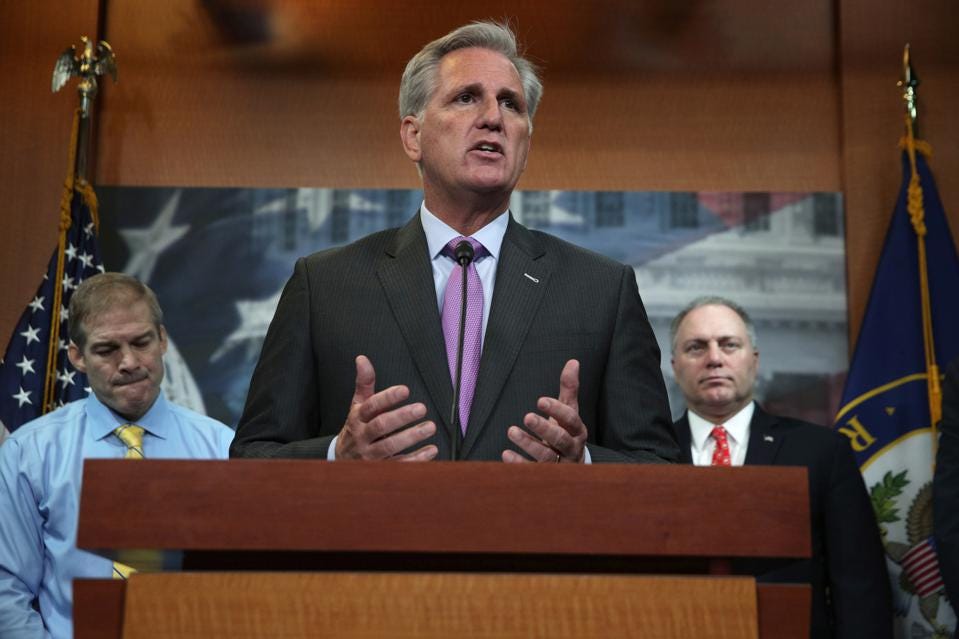 Kevin McCarthy is facing one of the classic new leader dilemmas: aligning expectations on his way to potentially taking over as Speaker of the House. Promising too little risks not getting the job in the first place. Promising too much risks negative consequences down the road.

McCarthy’s current issue is a function of the Republican’s likely narrow majority in the House, giving the 40-ish members of Freedom Caucus in Congress more clout. He can’t get elected speaker and can’t get legislation through without their support. He’s been to this movie before when the Freedom Caucus effectively blocked his bid to become speaker in 2015. So, he knows what to expect.

They apparently want McCarthy to commit to “wide array of investigations into the Biden administration” including impeaching Biden and some Cabinet members. They want influence. And they want the ability to vote McCarthy out if he doesn’t do what they want.

The only way to solve this dilemma is to get the real mission and balance of consequences right. This is straight out of Michael Brown’s ABCs of behavior management. Antecedents prompt behavior. They’re useless without expected and actual consequences. McCarthy must understand what’s actually going to happen if he does or not do what the Freedom Caucus is asking him to do.

Anyone considering running Twitter for Elon Musk faces a similar dilemma. Musk’s early moves have disrupted the company’s entire business model, confusing its customers, users and staff. If a potential new CEO doesn’t promise enough of a turnaround, Musk won’t hire them. If they don’t deliver what they promise, their tenure will be short and painful.

There are essentially four types of compensation: base pay, benefits, bonuses, equity. To greatly oversimplify an enormously complex subject, you likely want:

Long-term corporate survivors become adept at under-promising and over-delivering. They know that applying effort to negotiate lower targets at the beginning of the year make it easier to beat those targets though the year (and maximize their bonuses.)

The leaders you really want understand that their mission is not to do their jobs and hit their targets, but, instead, to deliver for others.

Lt. Colonel Benjamin Vandervoort led a battalion of paratroopers charged with taking and holding the critical crossroads town of Sainte-Mère-Église on D-Day, June 6, 1944. They took the town but were barely holding on when Vandervoort caught up with them as he had broken his ankle on landing. What he did not do was drop out of the fight to nurse his ankle or let his people back off and wait for others to show up and retake the town. He pushed his people to go beyond expectations and hold the town. Which they did.

General Norman Cota led the allied forces landing at Omaha Beach. They got trapped on the beach as the allies had underestimated the Germans’ strength. Towards the end of the day, the allies were considering withdrawing. But Cota wasn’t prepared to let the thousands of allied deaths on the beach be for naught. He rallied his demoralized troops to blow up a concrete wall blocking a point of exit and led the first successful breakout from the beach so the following waves of soldiers, equipment and supplies could move forward.

Click here for a list of my Forbes articles (of which this is #802) and a summary of my book on executive onboarding: The New Leader’s 100-Day Action Plan.

Follow me on Twitter.
View More
« Heed The Warning Signs Of Your Team Being Choked For Time

The Most Important Lessons From Disney And GE’s Botched CEO Handovers »
PrimeGenesis > All Events > Business Management > How Possible House Speaker Kevin McCarthy, Twitter’s New CEO, And You Must Get The Balance Of Consequences Right