Heed The Warning Signs Of Your Team Being Choked For Time 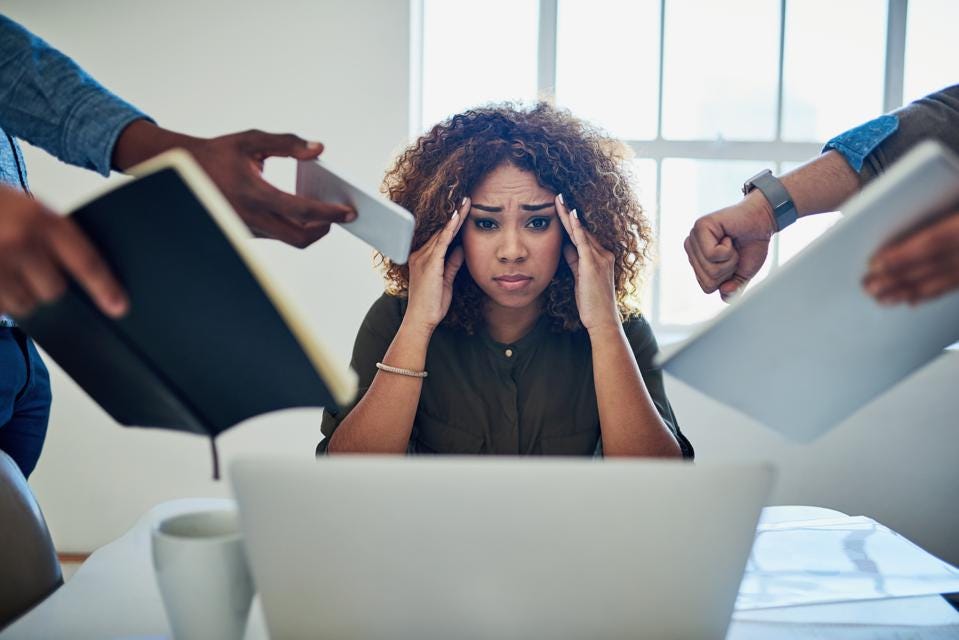 We’ve all seen it: more and more internal meetings and calls each getting less productive; people multi-tasking in those meetings and calls; people taking longer and longer to reply to emails or notes; decisions taking longer and longer. Just like shortness of breath, fatigue and pain may be symptoms of heart failure choking your body of oxygen, these are symptoms of bureaucratic paralysis choking your team of time.

Don’t try to treat the symptoms. Treat the underlying bureaucratic paralysis problem by focusing on the basics of delegation: direction, resources, authority and accountability.

Bureaucracies tend to grow on their own, perpetuate their established, often complicated procedures, avoid problems, downplay external risks, engage in infighting, give preference to personal interests, procrastinate, and reach decisions by “consensus” to minimize individual accountability.

A classic example was the US Department of Agriculture’s having “offices in almost all U.S. counties, even though only 14% of counties have valid farms or existing agricultural relevancy.”

One organization explicitly permitted multi-tasking in meetings because its people were spending so much of their time in meetings it was the only way they could get other work done.

Start by watching out for the symptoms:

Multi-tasking. Notice how many people are showing up late for meetings, multi-tasking in the meeting, and squeezing other meetings into meeting breaks or between meetings as opposed to being fully present in meetings or on calls.

Response time. Look at how many emails are in your typical manager’s in-box waiting for a response.

Decision-making. Look at how long it takes to make a decision and how many people can say “no.” The more people that have to reach consensus, the longer decisions take.

Figure out if you have a problem. If the balance of internal versus external meetings is off, multi-tasking is the norm, response times are slowing, decision-making is slowing, you probably do have a problem.

More often than not, the root cause is poor delegation and specifically either poor direction, resources, authority and / or accountability:

If you do have a problem and the root cause is poor delegation, fix the issues top-down, all at once.

Meetings. Ideally, you’d zero-base your meetings. Often when I’d take over a new function, I’d have the people working for me stop sending any reports. We’d do the reports the first time, but not send them. If someone complained or asked for a particular report, we’d send it out immediately. If no one complained, we stopped doing the report all together.

Do the same thing with meetings. Eliminate them all and then add back only the ones that people need to serve their internal or external customers.

Direction. Take the time to rethink and reclarify your direction. Make sure everyone is clear on the overall objectives, goals, desired result, time expectations and what happens when those objectives are achieved. Makes sure all know how their own objectives ladder up to those.

Resources. Make sure people have the resources they need to achieve their objectives and goals. In a world of scarce resources, this is how you set priorities. The ones that get your resources and time are the ones that really matter.

Authority. Once you’ve set the strategic boundaries and given people guidelines, simplify the decision-making process so they can make as many decisions as effectively, efficiently and timely as possible.

Accountability. Be clear on standards of performance, time expectations, positive and negative consequences of success and failure and then call people to account.

Doing all this gives your people the time they need to succeed.

Click here for a list of my Forbes articles (of which this is #801) and a summary of my book on executive onboarding: The New Leader’s 100-Day Action Plan.

How Possible House Speaker Kevin McCarthy, Twitter’s New CEO, And You Must Get The Balance Of Consequences Right »
PrimeGenesis > All Events > Business Management > Heed The Warning Signs Of Your Team Being Choked For Time