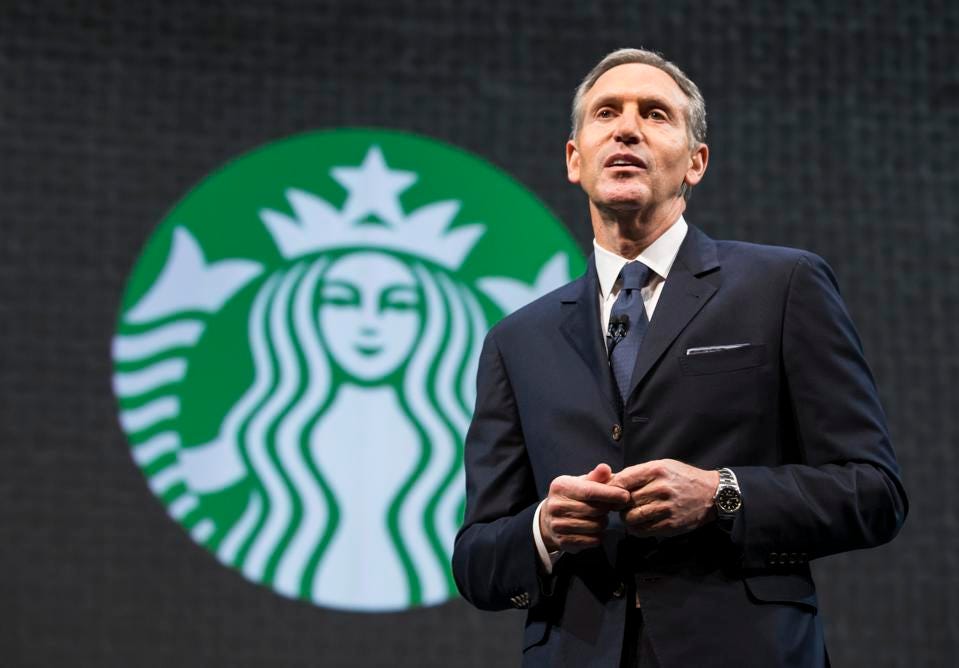 “Starbucks CEO Kevin Johnson is stepping down next month. Former CEO Howard Schultz will return in an interim role as the company seeks a successor by the fall.” So said an article from the Wall Street Journal this morning.

Their article explains that Starbucks board Chairwoman Mellody Hobson said Johnson’s decision to leave was his own, not the result of any board or outside push. “It’s been deliberate.” “This is not hasty in any way.”

But maybe not. Note their stock price is down -24% over the past year. Note they’re facing rising wage, training, supply and other costs as well as a unionization movement that’s gaining momentum.

The red flag is that they weren’t ready.

As Dee-Ann Durbin reported, “It’s curious that they were not able to find a successor within a year,” said Timothy Hubbard, assistant professor of management at the University of Notre Dame’s Mendoza College of Business. “For a company the size and stature of Starbucks not to have a solid succession plan is surprising.”

But, whatever they argue, they weren’t ready and have to go to an interim CEO.

Don’t take this wrong. Not all interim executives are a bad idea. Sometimes it’s a good idea to put someone in an interim role to give them experience or to groom one of their team members to take the role after them. Sometimes interim leaders are part of a two-step transition.

Not in this case.

This is a result of Starbucks’ failed succession and contingency planning.

The General Electric of old was famous for its succession planning. As Jack Welch was nearing the end of his run, three people were in consideration for the role: Jeff Immelt took Welch’s place and Bob Nardelli and Jim McNerney went on to CEO roles elsewhere.

Shame on Starbucks for having only one possible successor for Johnson. CEO succession is one of the board’s most important responsibilities and the Starbucks board failed here.

Relook at your organizational processes now. These include:

Strategic planning and future capability planning need to be hard wired together. As soon as you’ve locked into your strategic priorities, your very next question should be what future capabilities are required for us to be able to deliver those priorities? Think in terms of these steps:

Plans to fill the gaps (human, financial, technical and operational.) Note the three ways to fill the human gaps:

Talent development is about helping your existing people learn the knowledge, practice the skills obtain the hard-won experience and apprentice to masters to gain the craft-level caring and sensibilities they need to build their innate talents into valuable strengths.

The bigger and broader the role, the more time it’s going to take to develop your talent. Link it with your future capability planning by recruiting to fill innate talent gaps. Then give yourself:

Succession planning is about identifying who is going to take your senior people’s places in the future.

Contingency planning is about identifying who could take your senior people’s places on short notice if needed.

You need all four. Get and stay ahead of the curve.

Click here for a list of my Forbes articles (of which this is #757) and a summary of my book on executive onboarding: The New Leader’s 100-Day Action Plan.