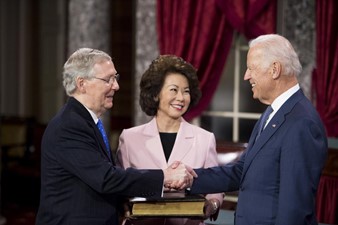 The election was a split-decision with Biden winning the Presidency, Republicans making gains in the House, and control of the Senate yet to be determined. There’s no doubt that the more President Joe Biden can reach across the aisle, the more effective his Presidency will be. He should start doing that now by involving the other side in his early appointments and executive orders.

Bryan Smith lays out a useful framework of persuasion in “The Fifth Discipline Fieldbook.” He suggests five approaches:

Those getting told what to do comply if they must, while actively looking for ways to get around or undercut the things they disagree with. They spend their free time thinking about what they’re going to do to get back at their oppressors when they get the chance.

Reaching across the aisle

“The refusal of Democrats and Republicans to cooperate with one another is not some mysterious force beyond our control. It’s a decision, a choice we make. And if we can decide not to cooperate, then we can decide to cooperate.” – Joe Biden, November 7, 2020

Biden and Senate Majority Leader Mitch McConnell were both in the Senate when the moderates from either party swung votes. That was a time when cooperation was more productive than confrontation. And Biden was VP when McConnell set denying Obama (and Biden) a second term as his top legislative priority and then refused to consent to any new Supreme Court Justices in Obama’s last year in office.

If anyone’s going to reach across the aisle, Biden is going to have to make the first move. The rest of his early appointments and upcoming early executive orders give him his first, best opportunities to do that.

The current most likely scenario is that the Senate will challenge and then advise and consent to most of Biden’s cabinet appointments. Executive orders don’t need Senate concurrence which is why people from the Obama administration are advising Biden to use them liberally. But that’s telling.

Instead, Biden can reach across the aisle by inviting Republicans to consult on or co-create these early decisions. This means at least asking for their ideas and input so they can contribute to the conversation and have some influence on the choices. The more Republican suggestions that are incorporated, up to and including putting Republicans in the Cabinet, the more Republicans will feel valued, part of the consensus, and closer to committing to moving forward together.

In executive onboarding, the Fuzzy Front End is the time between accepting and starting a job. A couple of the most important things to do in this period are jump-starting relationships and crafting your new leader’s 100-day action plan. Jump-starting relationships can be about making emotional connections with people you’re meeting for the first time, or it can be about sorting out your go-forward leadership team in a merger or acquisition.

This is, of course, exactly what we’re talking about here for Biden.

He’s meeting McConnell and all the other members of congress for the first time as President-elect. As newly crowned Henry V said to Falstaff, “Presume not that I am the thing I was.” Biden gets to re-set their relationships so all hopefully decide to cooperate – or are at least open to the possibility.

He’s sorting out his go-forward leadership team, teeing up Cabinet and other appointments – hopefully with Republican input and participation.

And, following on from FDR, Biden and his team are mapping out their 100-day action plan – hopefully inviting the Republicans in to cooperate.

Click here for a list of my Forbes articles (of which this is #674) and a summary of my book on executive onboarding: The New Leader’s 100-Day Action Plan.