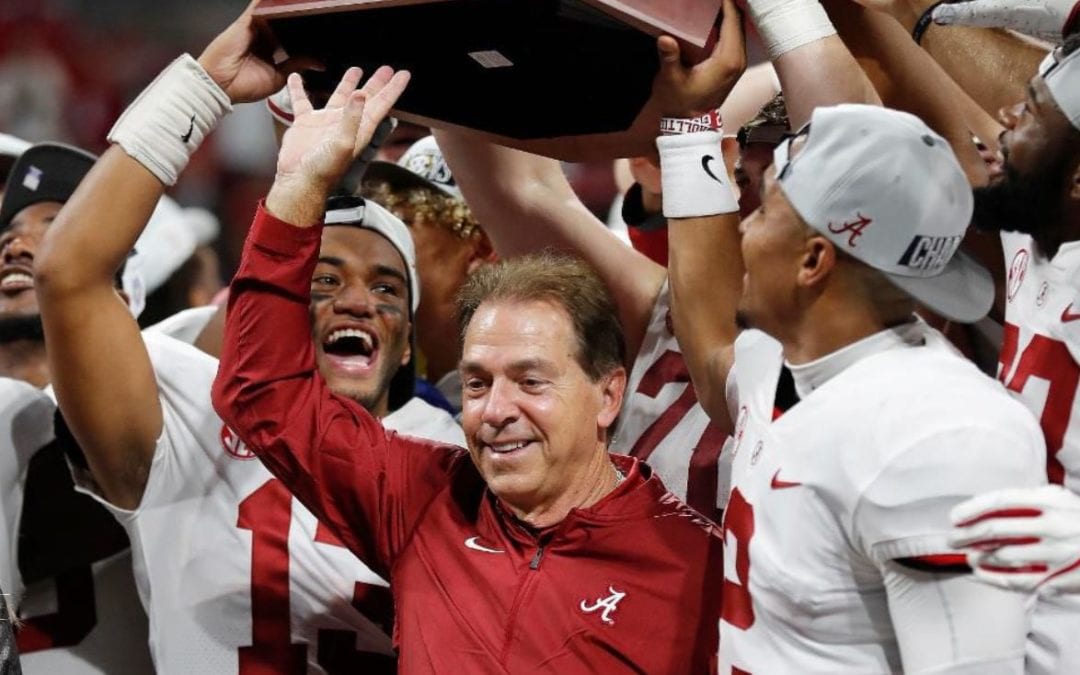 It’s déjà vu all over again – except the mirror image. For those of you who missed yesterday’s SEC football championship game (and you missed quite a game), Georgia had Alabama down 28-14, beating them on both offense and defense. Alabama’s Heisman contending quarterback Tua Tagovailoa was struggling. Then one of his own players stepped on his ankle, and he was out. Backup quarterback Jalen Hurts had the right mindset to step in, step up, and lead Alabama to a 35-28 win.

This is the mirror image of last year’s college football championship game – also between Georgia and Alabama in which Tagovailoa stepped in for the struggling Hurts, stepped up and led Alabama to the win. I wrote about the important lessons in leadership from that game then, and they are still applicable.

What was particularly extraordinary was not so much Hurts’ physical preparation and practice, but his mindset. He was the SEC’s player of the year two years ago. Last year he led the team all the way to the national championship. This year he was asked to be the backup quarterback. Others would have transferred to another school and a starting role there. Not Hurts. He stayed with his team. He supported his team in any way he could. He put his own ego aside to do the right thing for his team. As the generally non-emotional coach Nick Saban said after the game with a lot of evident emotion, “We’ve always had a lot of faith in Jalen. I told him when we put him in when Tua got hurt that it is your time. He certainly took advantage of it and did a fantastic job. I’m so proud of this guy from what he has done this year.”

It’s like what happened when Procter & Gamble’s John Pepper voted with his feet. Most thought Pepper was going to be the next CEO of the company. Then he got passed over in favor of Ed Artzt. The week after the announcement, 13,000 of P&G’s managers gathered for an annual meeting. When Artzt showed up he got the appropriate applause. When Pepper walked in a little later, he got a nine-and-a-half minute standing ovation. Most managers would have left the company to go be CEO somewhere else. Like Hurts, Pepper stayed. Like Hurts, Pepper’s time came later when he was named CEO as Artzt’s replacement.

Implications for you as a leader

It’s one of the acid tests of leadership. As a leader, it can’t be about you. It can’t be about people devoting their lives to you. It can’t even be about the team. The team needs to evolve over time. It has to be about the cause, the problem you solve in the world, the impact you make as a team and the good you do in the world. When you instill the right mindset, your team members will put that cause above their own short-term interests. Your Jalen Hurts will stay on in back up roles until it’s their time. Your John Peppers will help the next leader until it’s their time. Your George Bush 41 will tell the people who get the jobs they wanted, “Your success now is our…success. I am rooting hard for you.”

The leadership mindset from Alabama’s Nick Saban is how he gets all to put the team’s mission ahead of their own short-term interests. That may be the core of why he and his team win on such a regular basis. Adopt that mindset. Instill that mindset in all your leaders. Go beyond other-focused leadership to cause-focused leadership.

Enabling: The First Of The Only Four Ways To Succeed As A CEO »
PrimeGenesis > New Leader's Playbook > Momentum > Adjusting > Leadership Mindset Lessons From Alabama Football’s Sabin, Tagovailoa And Hurts