What It Means To Have A Culture Of Stability 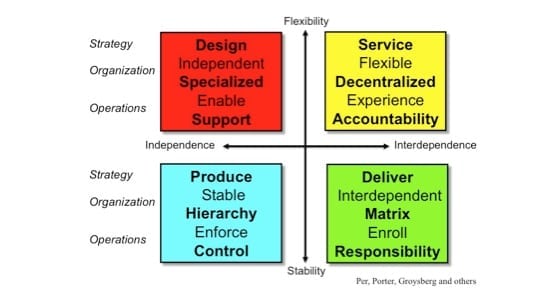 This is the second of four articles digging into cultures aligned with the four key strategies. The first article was on design and independence. This deals with a culture of stability in support of a production strategy. It’s all about ensuring reliability.

As highlighted in an earlier article, we know culture is the only sustainable advantage. The following framework for aligning culture and strategy was discussed in more depth in my articles on aligning strategy and culture and Why Most CEOs are Not Strategic Personally.

In “The Culture Factor” Boris Groysberg et al suggests eight primary cultural styles (learning, enjoyment, results, authority, order, safety, purpose and caring) that fall on the two dimensions of flexibility – stability and independence – interdependence. It’s a helpful construct that benefits from a fleshing out across the BRAVE dimensions of behaviors, relationships, attitudes, values and the environment.

A culture of stability is at the inner point of every BRAVE dimension. In every case it is more results-focused, authority-driven, formal, hierarchical, directed and closed. Expect people operating in a culture like this to care about order and safety, to be reactive and follow purpose and rules as written. These people will do what you tell them to do and not much more – which is exactly what you want.

Build a culture like this to produce things consistently and reliably on an ongoing, regular basis.

This culture is labeled “Stability.” Don’t expect flexibility or innovation. Expect compliance with the rules, with your direction. Expect people to deliver the minimum viable product every time. If you push people in a culture like this to operate more interdependently, to make decisions on their own, to be more proactive, at best they will resist and more likely, you’ll break the system.

Coca-Cola is a classic example of a production company with a culture of stability. It operates with a clear hierarchy of command & control with CEOs that see their primary task as enforcing policies. As a result every Coca-Cola produced everywhere in the world lives up to the same high standards.

One of Coca-Cola’s biggest ever innovations was the introduction of New Coke. A small Skunk Works group worked the project all the way through, leaking nothing until the last minute when the new formula was shipped to every bottler in the world for a coordinated world-wide launch. The product was superior on the dimension of initial mouth appeal, but the brand failed. As a result, the company swallowed its pride and relaunched “Classic Coke.”

It’s an example of why stable production companies should think twice about revolutionary innovations.

Zara is another example of a stable production company. They outsource all their design by relying on copying others’ designs. Their magic is that they can go from seeing a design on a fashion catwalk to producing it and getting into their stores in 15 days.

In some ways, this is the tightest and most easily understood and managed culture. If you’re leading a producing company, drive stability, independence, results, authority. Have a bias to organize hierarchically. Do not shy away from command and control operations. Enforce polices for the good of all.