The Only Six Viable Approaches To Talent Management 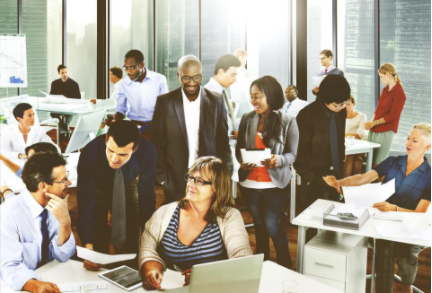 When managing talent most organizations fail to differentiate. Treating everyone the same produces schools of average ducks. Instead sort people by performance and role fit and invest, support, cherish, move up, over or out as appropriate. Expect to find most people effective and in the right role. Support them as a top priority. Then treat your other people differently, cherishing outstanding performers in the right roles and doing what it takes to help others improve their performance or circumstances.

Sort people based on performance (under performing, effective or outstanding) and whether or not they are in the right roles. 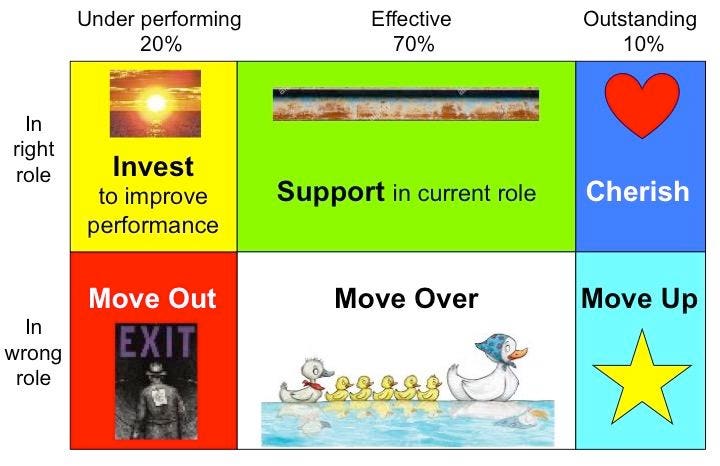 Hopefully most of your people are in the right roles and are effective. Pick your analogy. They are your girders, your backbone, your foundation. Without them, your organization won’t function. You need to invest appropriately to support them in their current roles, helping them continue to grow, perform and be happy. If everyone were like them, you would not need a differential approach to talent management and your job would be easy.

A small set of your people are going to be outstanding performers in the right roles. Cherish these people. Over-invest to help them grow, perform and be happy in their current roles. The traps here are treating them the same as the first group (effective in the right role) or thinking you need to promote them. Don’t do the first. These people are so much more valuable than the effective performers that they are worth dramatically more investment. Don’t promote them to their level of incompetence. Not all great performers make great managers. Don’t force them.

The group underperforming the right role are some of your trickiest cases. The temptation is to write them off. But if you were recruiting for their replacements, you’d hire them. They have the strengths, motivation and fit to succeed. But something is wrong. Generally, it comes to poor role definition, poor direction or supervision, poor training or lack of resources. Those are fixable barriers. Do what it takes to define their roles, fix their management, give them the training or resources they need and they will perform.

Outstanding In Wrong Role – Move Up

At some point some outstanding performers outgrow their roles. You need to promote them before somebody hires them away. When that happens, you’ll try to save them. Unfortunately counteroffers are almost always a bad idea. Timing is everything. These people think they are ready for promotions before you think they’re ready. If you wait too long, someone else will think they’re ready. Move them up sooner than you’re comfortable but with more support to succeed in their new roles.

Effective In Wrong Role – Move Over

These people are the hardest to identify. On the surface, everything looks fine. What you can’t see is that they are having to work much harder than their peers to deliver the same result. It’s a tribute to their motivation that they are willing to do so. But it’s not sustainable. At some point they’ll burn out or quit. Find them and move them to the right role before that happens.

Underperforming In Wrong Role – Move Out

View More
« How To Decide When To Partner, Contract, Relate Or Transact