In his new book, The Open Organization, Red Hat CEO Jim Whitehurst makes the case for catalytic leadership. Managers direct. Leaders inspire and enable. Catalytic leaders build on inspiring and enabling with their attention to earning the right to lead and encouraging without judging.

Whitehurst’s examples are drawn from organizations like Whole Foods, Zappos, Pixar, Starbucks, W.L. Gore and, of course, Red Hat. If you map Red Hat’s culture across dimensions of behaviors, relationships, attitudes, values and the environment you find mostly balance with spikes on identity, decisions, and learning. 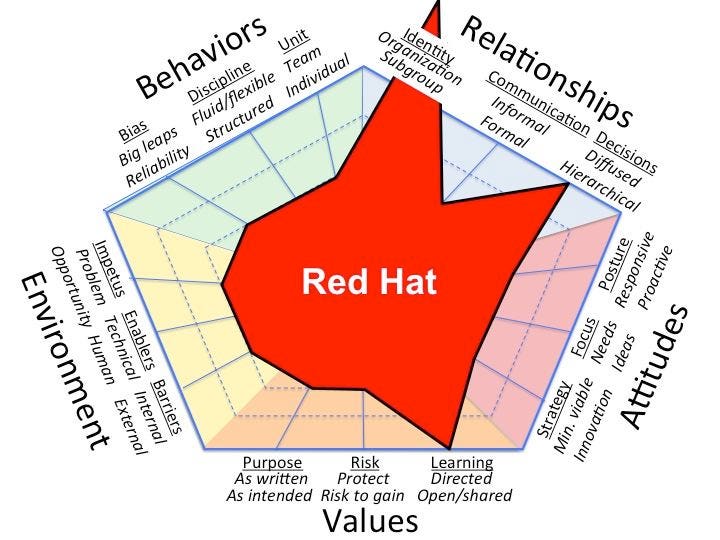 Identity. This one is off the scale as Red Hatters identify with the entire community of customers, contributors and partners creating better technology the open source way.

Decisions. The best ideas win no matter what HiPPO is in the way (Highest Paid Person’s Opinion).

Learning is completely open and shared as people are encouraged to explore what works across the community.

Leadership is about inspiring and enabling others to do their best together to realize a meaningful and rewarding shared purpose. Leadership is not about the leader. It’s not even about the team. It’s about the purpose.

Whitehurst describes his onboarding into Red Hat and realizing that people weren’t going to follow his direction, even though he came in as CEO. The core of Red Hat’s open organization was a focus on it mission: “To be the catalyst in communities of customers, contributors, and partners creating better technology the open source way.” That trumped any policy, procedure or officer. Everyone was empowered to do what they thought was right in pursuit of catalyzing communities to create better technology the open source way.

So Whitehurst realized his job was not to direct, but to leverage the soap box of his position to “create venues for bringing people together” and “to set the agenda for a range of conversations”. In an organization with high levels of employee engagement it’s more about sparking conversations and getting out of the way.

Red Hat strives to be a meritocracy. “The code talks.” It doesn’t matter what your title or position is, no one will follow anyone, anywhere, any time until they have earned the right to lead. Those that assume others will follow their lead fail.

Appropriately, this is a two-way street. At Red Hat, you have to earn the right to follow as well. Those that assume they should be part of a project or initiative just because it fits with their position are often disappointed.

The cultural lack of hierarchy and discipline at Red Hat means that judging others rarely works. Catalytic leaders don’t judge, they encourage. They let the group’s feedback drown out less desirable behaviors and focus their own efforts on serving as “agents that provoke or speed significant change or action.”