They were inseparable, until they were separated. They had no contingency plan. Fortunately they had enough time to work things out. But the lesson is clear: “Put in place contingency plans for the things that you don’t think are going to happen to you.” 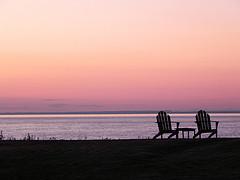 The quotes are from my interview with Phone Power’s Jim Murphy, who talked to me about picking up the pieces after his business partner Ari Ramezani died at the age of 44.

Jim and Ari started three businesses together, including Phone Power, which they launched in 2006. While they nominally divided the work, they were pretty much interchangeable, sharing ideas, problems and solutions. They were the closest of friends. Jim was the best man at Ari’s wedding. Others joked that the two of them should marry each other.

Life was good. Phone Power was growing nicely. And then Ari got sick. Stomach cancer. At first they thought it could be defeated. Then they realized Ari’s time was short. In the end it was seven months from first diagnosis to Ari’s passing. Not enough time. Never enough time.

But together they worked to plan an orderly transition. Jim and Ari tackled the things they could control, doing what they could to safeguard Ari’s heirs and the future of the business. In particular, they restructured the ownership of the company, put in place a board of directors and engaged in forward-looking succession planning. Here’s how they did it:

As an LLC, Phone Power has members instead of shareholders. Jim and Ari each held 40 percent of the equity with the other 20 percent spread amongst other stakeholders. In the restructure, they changed Ari’s equity from voting to non-voting. His heirs would get the financial benefit without diluting Jim’s ability to run the company.

Adding a Board of Directors

Phone Power did not have a board. Now Jim needed one to guide him and protect the interests of the new non-voting owners. After 20 years of working together, Jim and Ari could challenge each other’s ideas without fear of damaging their relationship. There was not going to be anyone else that could do that for Jim on his or her own. A board could.

Ari’s cousin, Sam Ghahremanpour, had done some work with Phone Power before. Jim liked him and respected him and asked him to come in and become COO. He was never intended to replace Ari, just pick up some of the burden on Jim. For now, Phone Power is still running a relatively flat organization with all the key managers reporting directly to Jim and Sam. At some point it will grow to where it needs a CFO and CHRO. (And yes, they now have key man insurance on Jim).

Ari died in February 2013. At the time of my conversation with Jim in October 2013, he said he felt that things were going well for the business. The transition to the new ownership structure went relatively smoothly. The board is up and running and learning its way. Sam is helping.

After a few months, Jim suggested Sam take Ari’s old office next to his. No one had walked into it since Ari died. There was even a half-empty bottle of Gatorade on the table. While the move made all the sense in the world, Jim is still taken aback when he hears a voice other than Ari’s coming from Ari’s office. Some things you are not supposed to get over.

When I asked Jim about his advice for others given this experience, he said:

When you’re married to someone, the responsible thing is to set up a will to plan for the unexpected. In business, the principle is the same. I would recommend first discussing with your partner(s) what a succession plan would look like.  Should there be a buy/sell agreement?  Key Man Insurance?  And if appropriate, document those plans in your Operating Agreement. We were fortunate enough to have the time to discuss and make plans. Many people might not be so lucky. With the business being the primary revenue stream for both the remaining partner and the deceased’s heirs, things can get chaotic really quick.

Sometimes things will play out as you planned, and you can implement the plans you prepared. More often, you’ll need to adapt your plans. In those cases, manage the things you can manage, adjust to the things you can’t manage and keep moving forward.