Three Different Approaches To CEO Succession At Walmart, Kroger And Microsoft… Which Is Best?

CEO succession is a big deal. The best-run companies and boards invest a lot of time and energy to think it through in advance, and do everything they can to smooth the new CEO’s onboarding into the role. We’re in the midst of three very different CEO successions at Walmart, Kroger and Microsoft. The lesson to be learned here is clear: one size does not fit all when it comes to succession.

At one extreme is Kroger, where everyone knew the succession plan for a long time and the formal announcement of Rodney McMullen’s appointment as CEO was really not news (see “Kroger CEO Transition: No Story Here”).

At the other end of the spectrum is Microsoft, where Steve Ballmer’s departure was announced without a plan for who would be taking his place. It doesn’t appear that they know that yet (see “Coming Soon: The Great CEO Transition At Microsoft (And The 7 Steps That Will Help Them Get It Right”).

Walmart is in the middle, announcing that Doug McMillon will take over from Mike Duke. While many found McMillion’s appointment surprising, the choice makes sense after a moment’s thinking.

Which Approach to Succession Planning is Best?

It really depends on the context. Kroger’s “no story here” approach is best when things are going well and little change is required. Walmart’s slight surprise approach is best when you want to shake things up a little. Still, it’s hard to think of a scenario where Microsoft’s approach is what anyone would want. Uncertainty creates stress and people often make suboptimal choices under stress. But as Microsoft scrambles to pick up the pieces, they should consider that bringing in new blood makes sense when you want to shock the system or at least shake it up a lot.

Which Approach to Onboarding is Best?

The right approach to onboarding depends on the context (the business environment, organization’s history and recent business results) and organizational culture’s openness to change (click here for a more detailed explanation): 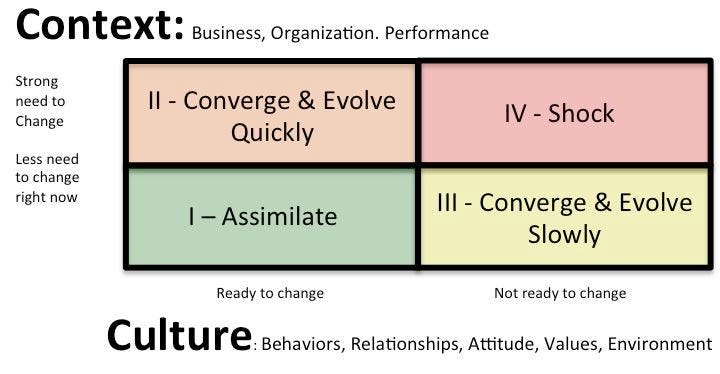 Implications for Kroger, Walmart and Microsoft

Kroger is a classic example of an organization with less need for change right now, but ready to change. In cases such as this, promoting from within makes a lot of sense. Giving the new CEO a long time to ramp up seems like exactly the right approach.

Compare this to Walmart – its same-store sales are declining and they need to make some changes… quickly. Promoting from within suggests that they think at least some in the organization are ready to lead this change. Thus, their new CEO will need to converge into the new role quickly and start evolving things. [Follow this link for more on how that played out.]

Microsoft is facing a completely different situation, which worsens every day it waits to name a new CEO. Uncertainty is stressful. The longer it takes to start the changes, the greater the urgency of the changes will be. If Microsoft waits any longer, it will get to the point where its new CEO is going to have to shock the system.

Implications for Boards and Leaders

View More
« When Leading Teams of 30 or More, Hierarchy is Your Friend

How To Bridge Unanticipated Discontinuities »
PrimeGenesis > New Leader's Playbook > Others > Three Different Approaches To CEO Succession At Walmart, Kroger And Microsoft… Which Is Best?