Just like the Star-Spangled Banner is not about a flag, BRAVE leadership is not about you. At their core, both are about purpose – the cause. Our veterans answered that call. Will you? 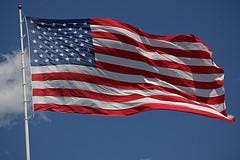 Let’s back up. The Star-Spangled Banner does not end with a question. Yes, its first verse does:

O say does that star-spangled banner yet wave, O’er the land of the free and the home of the brave?

But the answer to that question is in the less often sung fourth verse:

Then conquer we must, when our cause it is just…And the star-spangled banner in triumph shall wave O’er the land of the free and the home of the brave.

Thus the song is not so much about the flag, as it is about what the flag symbolizes – our just cause: the triumph of the free and the brave.

Similarly BRAVE leadership is not so much about you as the leader, or even those following you, as it is about the cause. Indeed, while some people may follow a charismatic leader for a time, they will commit themselves to a BRAVE leader’s cause over time.

We celebrate our veterans today in the land of the free and the home of the brave. It is their courage and sacrifice that allow us to celebrate the triumph of our just cause. Today is a good day to celebrate some of their examples of the components of BRAVE leadership.

Environment sets the context for everything else in terms of where you are playing.

Values are the bedrock of a high performing team. Get clear on what really matters.

Attitude encompasses strategic, posture, and culture choices around how to win.

Relationships are the heart of leadership. If you can’t connect, you can’t lead.

Behaviors are the actions that make real lasting impact on others.

Environment: Where to play?

Douglas MacArthur gives us one of the best examples of good choices around where to play. In his Pacific campaign in World War II he and his forces avoided the Japanese strongholds and leapfrogged from undefended island to undefended island, maximizing progress while minimizing causalities.

Values: What matters and why?

The Navy SEALs embody this with their relentless focus on mission and team. They combine an incredible discipline with deep-seated underlying values to keep their focus on what really matters and why.

Attitude: How to win?

It’s not always the most proactive that win. George Washington and his forces perfected the approach of trading land for time during the revolutionary war to be able to keep fighting until they could win.

Relationships: How to connect?

As Bryan Smith pointed out, sometimes you need to tell, and sometimes sell, test, consult or co-create. Gustavus Smith got this very wrong when Jeff Davis asked him to take over the defense of Richmond during the Civil War. Instead of selling or testing, he tried to co-create by asking what Davis had in mind. Davis immediately turned to Bob to take over instead. (As in Robert E. Lee.)

In the end, what matters are behaviors and actions and impact. Norman Schwarzkopf and his forces demonstrated this in the Gulf War as the faked right, swung left, cut off their enemy and subdued them quickly with minimal casualties to their own forces.

The only way to achieve your vision, in line with your values, in the context you choose, is through the attitude, relationships, and behaviors you model and engender in your followers. It’s not about you. It’s about your cause. It’s not enough to have compliant followers, doing what they must. It’s not even enough to have contributing followers. You need followers committed to a deserving cause.

Learn from our veterans. Answer the call. Be BRAVE yourself and help your followers be BRAVE individually and together in a winning BRAVE culture befitting the land of the free and the home of the brave.

Click here for more from the New Leader’s Playbook

View More
« Ben & Jerry’s, Unilever And The ‘Flavor Graveyard’ Of Past CEOs