Why Overnight Start Up Success Is A Myth

The best-kept secret in the start-up world is that there is no such thing as an overnight success. Success typically takes six to seven years – if you survive the first three.

Why? The real key to success comes from having a better idea, putting effort behind its positioning, tracking down the right resources and working harder than your competitors over an extended period of time. Let’s look at each step:

Have A Better Idea

Find an unsolved problem. Solve it. Commit to your solution and continually improving it to stay ahead of the inevitable competition. I recently spoke with Scott Kurnit, who founded About.com and now heads up New York based start-ups Keep.com and The Swizzle.com, who said “In the new world, you’re going to have a ton of competitors.” You have to be different. If you’re copying others, you’re “always shooting behind the duck.”

The pivot point for most start-ups is making sales. Doing that requires a better idea, but it also needs to be positioned effectively. As Triangle Start-up Factory’s Chris Heilvy took me through, of course ideas are important. They are the first step to any great innovation. But they are “not worth (anything) until someone pulls a dollar out of their pockets.” Get to real revenue early on.

Kurnit pointed out that this applies to some, but not all start-ups. He shared that “You need to generate revenue at the RIGHT time…the biggest don’t necessarily turn on revenue early. You have to decide if you’re planning to get to first or hit a homerun.”

Kurnit reminded me of the funding ladder: 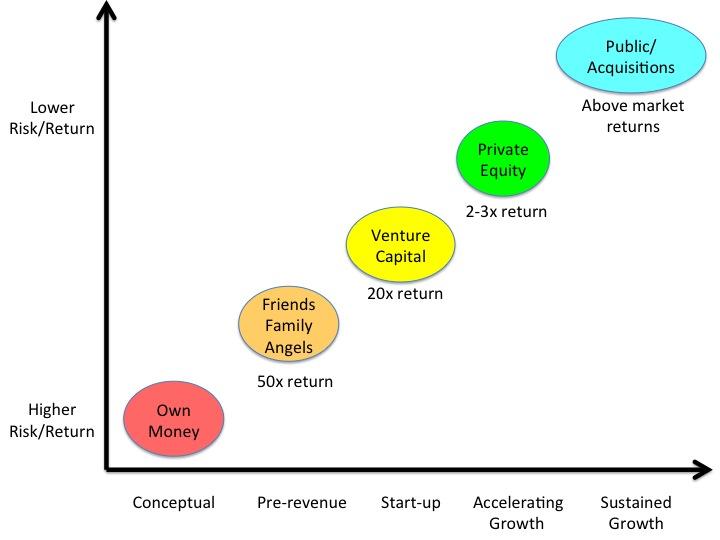 The right resources for your start-up depend on your needs. In today’s world there are so many outsourcing opportunities that many companies never need major infrastructure. When Instagram got acquired for $1 Billion it had thirteen employees.

On the other hand, Kurnit’s Keep Holdings raised $43 Million before it had any revenue because it needed to scale to a point that would make “big company” customers comfortable working with them.

Net, get the right resources for your idea, not for some pre-determined script.

Overnight successes take six to seven years – if they survive the first three. For example, most people might not be aware that “overnight success” Twitter struggled for its first two years. The typical timeline for start-ups is:

Year I is about the dream. It’s often a wonderful year as everything is too new to be scary. Expectations are low and mistakes are cheap. As Kurnit put it, at this point, “People are everything.” He is convinced the keys are curiosity and risk taking. Find people who don’t want to work in a traditional corporation. And remember that you must lead differently as your team grows.

[As an aside, Kurnit laid out the difference between starting a business inside a corporation and outside one. The advantage of starting inside is you don’t have to worry about payroll. But, almost by definition, you’re going to have people that are less open to risk-taking and extra friction with the corporate people around you. If you start inside, isolate yourself as well as possible so you don’t get caught up in the corporate culture and endless meetings.]

Year II is scary. By then you have “built it.” Now you’ve got to get the customers. Often entrepreneurs fall into Paul Grahm’s concept of the “trough of sorrow” at this point. Early failures are good because they cause you to re-tool, which ends up increasing your chances of success over time. Disaster strikes when you’re almost successful. Then you’re tempted to keep going instead of either retooling or stopping. This can lead to a death by a thousand cuts, a painful way to go.

Year III is the break point. Either your business is working or it isn’t. If it is, keep going. Keep evolving. Remember, you’re still a start-up, still working towards that “overnight success” several years down the road. If the business isn’t working yet, quit. Then start again with an even better idea, position it better and find other resources, but be prepared to work even harder the second time around.

We’ll give Kurnit the last words of warning:

“Start-ups are the innovation point in our economy.  The funding structure is set up for the majority of these crazy, audacious ideas to explode… in a bad way. That said, there’s no more exhilarating and potentially rewarding way to work.”