What Your Company Can Learn From Fast Food And ‘Fast & Furious’

Not all changes need to be revolutionary. Sometimes the best choice is to stick with a winning formula and continue to evolve it to keep it fresh. (See my earlier piece “Evolutionary, Revolutionary or Blended Innovation: Which is Right for Your Organization?”). Witness the success this summer of the “Fast & Furious 6.” Sequels sell. (Worldwide, the movie grossed more than 700 million.) 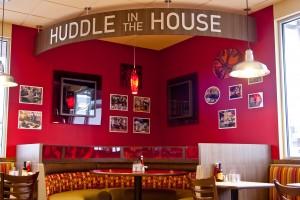 But this approach can also work in business. One example: Huddle House, a chain of “Classic American Diners serving great comfort food.” As Huddle House’s new CEO, Michael Abt, was settling into his role – he spent his first couple of weeks converging (part of his 100-day action plan). He interviewed more than 40 people for over 70 hours, “asking a lot of questions.” What he learned was that there was a real opportunity for a “system refresh.” Abt decided to invest in that as his early win.

We all know more and more people say they want healthier foods. But, as Abt puts it, “People don’t necessarily do what they say.” Certainly, the people ordering Huddle House’s stuffed hash brown potatoes are not practicing the healthiest eating habits. But they are happy. And that makes Huddle House’s franchisees happy.

Abt learned that the chain did not need a revolutionary makeover, just an evolutionary remodel. The trouble was that the restaurants that most needed the refresh were the older, outdated restaurants that belonged to older franchisees – exactly the ones with the least incentive to invest in their restaurants for the long term. Having spent 12 years working in an Arby’s franchise, Abt understood the franchisees’ dilemma.

The dilemma buster was to change the balance of incentives. Specifically, Abt and his team arranged for Franchise Finance America to provide franchisees loans for the $85,000 – $120,000 required to refresh the stores. Then, Abt and team offered a $25,000 incentive to the first 100 franchisees to go forward with the refresh. Applying this to the down payment and finance charges meant the franchisees essentially could do a cash-free refresh.

One month into the program Huddle House had already had 25 franchisees request remodel guides and 11 submit scopes of work – an early win in the making.

The early win concept is common to the executive onboarding programs proposed by both Michael Watkins in “The First 90 Days” and our group, PrimeGenesis, in “The New Leader’s 100-Day Action Plan.” Certainly results are important. Even more important is giving the team cause to say “Look what we got done!” as an expression of confidence in themselves and in the new leader.

Don’t get me wrong. Early wins in isolation can backfire. They must be part of a program of converging and evolving. First you converge, becoming part of the team. Abt’s early questioning is a good example of one aspect of that. Then you pivot, agreeing on an imperative with your team. After that moment, you can start evolving – with a lot more confidence that people are going to go with you.

If You Want to Change Corporate Culture, Dare to Tell the Truth »
PrimeGenesis > New Leader's Playbook > Team > Operational Accountability > What Your Company Can Learn From Fast Food And ‘Fast & Furious’