Lessons From Morsi And Mandela On Sustaining The Win 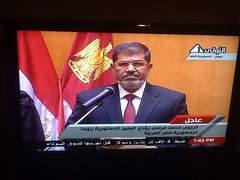 Where former South African President Nelson Mandela was able to sustain the win, ousted Egyptian President Mohamad Morsi was not. Different times. Different worlds. Complexities abound. But the applicable lesson is that Mandela did not overly press the advantage while Morsi and the Muslim Brotherhood did. If you exploit your wins too much, the losers will band together and rise up against you. Losing gracefully is gentlemanly. Winning gracefully is one of the keys to sustaining the win.

South Africa’s black population suffered immensely under Apartheid. Mandela himself spent almost three decades in prison. When Apartheid was finally ended and Mandela became South Africa’s first black president, he mantra was reconciliation. Instead of pressing the advantage, he worked as hard as he could to enroll everyone of all races in South Africa’s future. There is not doubt that this played a major role in paving the way for future positive changes.

The Muslims in Egypt suffered under military dictatorship. When the revolution overthrew the government and Morsi won the election, he and the Muslim Brotherhood decided it was their turn. They turned the tables on their erstwhile oppressors and started oppressing them. It took only a year for the population as a whole and the military to say “enough” and take back power.

If you adopt the attitude of the conquering hero, some will feel conquered. Making people feel conquered is not always the best way to build positive relationships. Some enjoy stomping on the loser’s necks, twisting the knife, making them feel the agony of defeat to heighten the difference and shine a light on their own new power. That enjoyment tends to be short-lived, as it makes building a productive coalition that much harder. Never underestimate the impact of an enraged minority.

If you adopt the attitude of the next steward, building on the positive things that went before and setting up the positive things to follow, others do not necessarily have to give up their ownership. They can stay involved, and help you help others manage through the transition. This approach is far more likely to lead to positive relationships with more people.

View More
« Why More Marketers Are Taking the CEO Reins