Leadership is conducted across a series of moments – moments of opportunity and opportunities to make an impact. Whether planned or unplanned, seen or unseen, known or unknown, they go by in a flash. Taking advantage of those opportunities involves engaging with the preludes leading up to the moments, the moments of impact themselves, and the follow-through after moments pass. 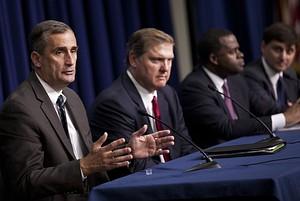 This is Brian Krzanich’s moment as Intel’s new CEO. It was planned, seen and known. One can only hope he has managed the prelude well and can take advantage of the moment since Intel is at a point of inflection.

PRELUDE: Preparation and getting a head start

Preparation breeds confidence. Getting a head start puts you in control. Ajay Banga did this particularly well at MasterCard, creating and leveraging a fuzzy front end between when he was named CEO and actually started. He used the time to earn the right to lead before starting to lead.

Krzanich has had the opportunity to do the same thing in his six months as COO. Now that he’s been officially named to be CEO, he should use the last couple of weeks of his prelude to make sure he has thought through the BRAVE questions around Behaviors, Relationships, Attitudes, Values and Environment and shored up his critical relationships.

MOMENT OF IMPACT: Be Do Say

Make sure your words and actions completely line up with your underlying beliefs. At moments of impact involving disaster relief, everything The Red Cross’s Charley Shimanski does and says makes people feel proud about what they are doing. People believe him because he believes it.

As Krzanich moves into the role he has to manage his message, leverage all available amplifiers and persevere in delivering his message in everything he says and does, making sure he truly believes it in his heart.

CEOs should spend their time and energy figuring out how to inspire and enable others instead of doing things themselves. The most effective CEOs focus on three overarching processes: strategic, operational, and organizational, running them over and over again. Chiquita’s CEO Fernando Aguirre was a model of this, voting with his feet to show support for employees by showing up at events that were most important to them.

Intel is at a crossroads. As the PC market continues to decline, Intel either goes down with it or innovates in new areas like “ultra-mobility” to get on a new path to growth. By all accounts Krzanich is poised to lead that change. It’s not going to be a one-time shift, but will require an on-going set of iterative conversations and adjustments.

Ultimately, leadership is not about the leader himself or herself. It’s about inspiring and enabling others to do their absolute best together to realize a meaningful and rewarding shared purpose. Krzanich needs to be BRAVE himself and manage through a series moments of impact to re-create a winning BRAVE culture for the Intel of the future – the only sustainable competitive advantage.

View More
« How to Turn Rejection into a Job Offer