The strongest leaders get that it’s not about them. It’s about the others. Whether you call them “first followers” or “front line,” leadership is about inspiring and enabling others to do their absolute best together to realize a meaningful and rewarding shared purpose. 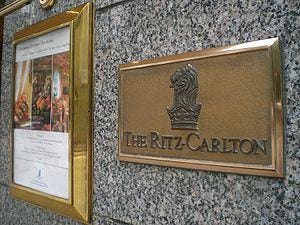 The Ritz Carlton logo at the former Hong Kong … WIKIPEDIA

In their new book, “Judgment on the Front Line: How Smart Companies Win By Trusting Their People,” Chris DeRose and Noel Tichy drive the importance of trusting the people in the know – the ones who are on the front line.

Similarly, organizer Randy Joy Epstein started the first ever TEDxTimesSquare this week with a video on how the First Follower Transforms a Lone Nut into a Leader. Both DeRose and Tichy’s book and the TEDxTimesSquare conference made the following points:

Peter Shankman, serial entrepreneur and marketing guru, regaled us at TEDxTimesSquare with “Nice Finishes First” stories. His suggestion was to “get the audience you want by treating the audience you’ve got one level nicer than crap.” In one example, he related how a maid at the Ritz-Carlton Hotel noticed he was low on toothpaste and bought him a new tube. He was so impressed that he tweeted a picture of the note she’d written. The Ritz later told him they had tracked “thousands of dollars” of reservations back to his tweet.

This story would come as no surprise to DeRose and Tichy, who explored the Ritz-Carlton’s ideas and values, education, experimentation, mindset and investment that leads to stories like Shankman’s. They know that maids, and all other Ritz-Carlton front line employees, are empowered to spend up to $2000 to “improve a guest’s experience, handle a complaint or fix a problem.”

Switch from Conflict to Collaboration

DeRose and Tichy also describe the power of the Mayo Clinic’s “Plus One” program, which explicitly empowers any front line employee to have their boss call in a second opinion when they think patient care is at risk.

If you’ve got a meaningful and rewarding shared purpose, you’ll get those first followers and their followers devoting themselves to the cause over time. Trust in that. And trust in them. DeRose and Tichy bring a number of other examples to the forefront:

IBM ’s head of human resources, Randy McDonald gets it, saying “Trust people at the lower levels. They live it. They understand it.”

Yum! Brands CEO David Novak gets it, flipping the model so that his corporate headquarters is merely one big restaurant support center.

Steelcase’s Jim Hackett gets it, pushing his team to think, develop a point of view, plan to implement and then implement.

Ron Johnson did not get it at JC Penney , as he tried to push his ideas down in the organization. His front line employees told him the risks. But he either never asked or never cared until it was too late.

In their book, DeRose and Tichy lay out a relatively straightforward five-step model that will help inspire and enable the front line. It’s worth digging into:

This gets at the heart of The New Leader’s Playbook: BRAVE Leadership

Executive Onboarding: Manage through the stages of onboarding, from before the first contact well past the first 100-days »
PrimeGenesis > New Leader's Playbook > Messaging > Day One > Engagement > IBM, Ritz-Carlton and Yum! Brands Empower Front Line Employees… Do You?