Transformational change requires aligning plans, people and practices around a shared purpose. Tackling those pieces with the right approach and resources step-by-step in stages instead of all at once is often the difference between success and failure. Do four things: 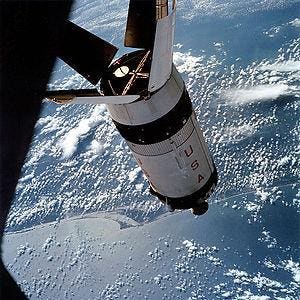 Brent Stoute and his team build things that cannot fail. Each component of their communication satellites has to work for 15 years with no maintenance, no tune-ups, no failures, no questions asked. Building a satellite to this standard of quality is a gargantuan task, best managed in digestible chunks.

Stoute encouraged  them to have their engineers engage with one part of the operation first, learn that, practice that, and then learn another part and another part. “Why try to digest the whole meal at once?” he argued. Further, it’s not enough for an organization’s people to learn the skills, they need to have plans and practices in place to complete the transformation successfully.

Big, audacious space or terrestrial missions are inspiring. The trap is thinking that just declaring the mission is enough. Helping the world communicate better, feeding the poor, saving the world from disease does not happen without well thought through strategy and plans.

Transformations, as discussed here, involve leveraging existing capabilities to grow in new areas. Numerous opportunities surface for existing employees to fill these newly created roles, however one must consider how the baseline work will be maintained.

Never forget that maintaining existing employee morale is a key element, and the decisions regarding new assignments should not be taken lightly. The amount of energy released from a well-motivated employee can make the difference between transformation success and failure.

As expected, a balanced approach between existing and new employee assignments should yield optimum results for such exciting initiatives. Further, the onboarding process is also a key element in the rapid formation of cohesive team (see my previous article, “Executive Onboarding: The Key to Accelerating Success and Reducing Risk in a New Job”).

Even with the most compelling purpose, winning plans and the right people, major transformations don’t stick until they are embedded in the systems and culture. Be clear on what changes you are making related to the firm’s behaviors, relationships, attitudes, values and environment, per the BRAVE culture model.

Be clear on how you’re going to manage the steps to get there. Sometimes you can manage the change from within. Sometimes you’ll need the catalyst of an acquisition or merger to drive a cultural step-change. Additionally, never forget the power of early successes to sustain momentum. Early wins also help motivate the team, which can carry it through difficult times, should they occur.

Utilize the Right Resources by Stage

Just like mission control jettisons the first stage of a rocket when its job is done, just like a baseball manager pulls the middle relief pitcher, when it’s time for the closer, do not shy away from the stage-by-stage step changes to people and practices required to deliver your transformation. Major transformations require tough choices at every step of the way.