Any CEO will tell you “It’s lonely at the top”. History is littered with dead heroes who went out on solo quests, accomplished their goals, but perished in the process. Those that survive the change they lead do so because they don’t do it on their own. They bring the team with them. This is what Avon’s new CEO Sherilyn McCoy must do. This is what Wisconsin Governor Scott Walker did. 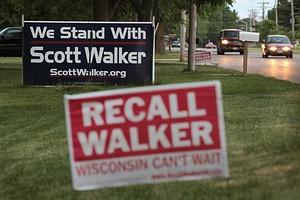 Scott Walker survived yesterday’s recall election. Like every other governor in the United States, Walker faced and still faces tough times. For decades, government leaders have been “kicking the can down the road” by trading short term pay increases they would have to fund out of current budgets for pension increases that could be paid for later.

Walker decided to draw a line in the sand, restrict collective bargaining and cut back the pensions. Not surprisingly, this upset some people. Their discontent played out in protests, in legislative battles that included walkouts, in court battles, and in yesterday’s recall election.

Walker knew he couldn’t withstand the recall on his own. He needed help and support from others – a lot of others. One of the keys to Walker’s success was how broadly he defined the team. He went beyond his current supporters, beyond his state, to reach out to people across the United States. Twice as much money was spent on this recall election as was ever spent before on any election for governor in Wisconsin. Walker outspent his opponents by a large margin with 2/3 of the money he raised from out of state.

Steps to Survive Your Own Recall Election

There’s always a conversation about six months after leaders assumes new positions. Someone asks those leaders’ bosses how they are doing. Don’t kid yourself. Those are recall elections. If things are going well, the leaders survive. If they don’t win the vote, they’re gone. Maybe not right then, but sooner or later. Often the vote is explicit. Other times it’s implicit. But there’s always a vote.

One CEO was brought in as a change agent. The company’s main owners thought they wanted change, but weren’t happy with how the change was unfolding. They took their concerns to the board of directors. Fortunately, this CEO had brought the board members along with her in the change effort. They supported what she was doing and how she was going about it. The board members were able to talk the concerned owners out of precipitous actions and the CEO survived.

Lead. But don’t lead on your own.