Paul Callahan won the Olympic trails this past weekend and will represent the USA again  in the Paralympic Sonar class in the UK this upcoming summer.  I previously talked about Paul in an article on Forbes.com on how Positive Misdirection Instills Confidence.  Paul is one of my personal heroes – win, lose or draw.  While he's always inspiring, it's definitely more fun when he wins.

As Paul puts it in this video shot after the victory, "When you do your best good things can happen": https://tinyurl.com/6mkj6q9.

It's another chapter in a great story of overcoming adversity on an ongoing basis:

One of the biggest challenges Paul has to overcome on a regular basis is his being a quadriplegic.  Paul deals with that about as well as anyone could ever hope.  Look at his record of achievement.

Then, there was the protest that didn't go his team's way in the 2008 Olympic trials.  From what I know, accepting my bias, that was a bad decision.  That hurt.  Paul chose to deal with that not by escalating the debate, but by committing himself to winning this year. 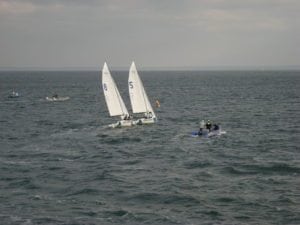 Then, as Paul put it, he had to win a "match race inside a fleet race" in the last race to go to the Olympics.   Actually, all Paul had to do was finish within two boats of his main challenger.  There was so much that Paul and his team could not control that he operationalized that as simply finishing ahead of the other guys.  Stll, as Paul told me "these trials were pure combat – and ever so gratifying."

All in all, if this isn't an example of BRAVE leadership for others to follow, I don't know what is.  And that, sports fans of all sports is the concept behind The New Leader's Playbook.