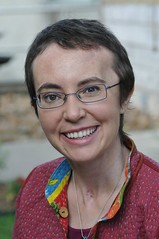 We are witnessing an amazing tale of overcoming adversity unfolding in real time. We all know the story of how Gabrielle Giffords was one of thirteen people injured, while six others were killed, in gunfire a year ago. We all have seen the stories of the miraculous care she received at the scene, at the hospital, and since then. We all have a sense of how her family and friends have rallied around her. It’s terrific.

The most recent step was her resignation from Congress.

If you have not watched her final appearance in Congress (this time around), do it now.

Did you watch it? If not go back and follow the link.

Giffords is not acting like a victim. She is demonstrating BRAVE leadership at its best:

When she stepped into the well of the House, that is what her colleagues saw. They didn’t see a Democrat or Republican; they saw a courageous colleague doing what she knew to be the right thing for the right reasons in keeping with her oath of office. They saw in her a demonstration of the kind of courage that each of them wished they possessed and could display, should the need ever arise. And they witnessed the kind of strength and resolve that defined her as the kind of American they all believed they were.

Like Giffords, business leaders will face things that require taking a step back before moving forward.  The lesson is to take that step back in a way that makes it easier to move forward later.  Those that do an honest assessment of their environment, demonstrate their values, approach the event with the right attitude, strengthening relationships along the way with behaviors that make positive impacts turn temporary set backs into wins.

The close of Giffords’ resignation letter lays it all out:

Hope and faith…Hope that our government can represent the best of a nation, not the worst. Faith that Americans working together – in their communities, in our Congress – can succeed without qualification. Hope and faith that even as we are set back by tragedy or profound disagreement, in the end we come together as Americans to set a course toward greatness.

This is a classic example of the heart of The New Leader’s Playbook: BRAVE Leadership