Leading by Example with Flames of Giving 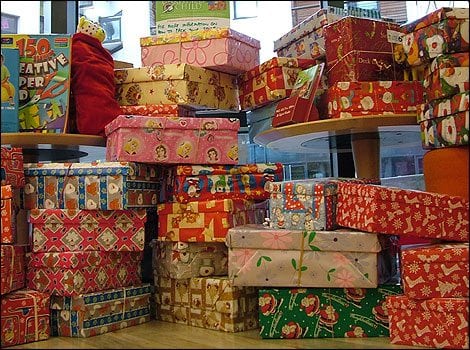 Almost two decades ago, Sari was looking for ways to make her children more aware of, and more connected with, the community around them.  She knew there were others in need.  She wanted her children to understand “that people in need are everywhere and you can do something to make a difference.”

So she called some local agencies that connected her and her children with people in need.  They wrote up “little flames” with information about the people in need and recruited their friends and neighbors to donate gifts.  That year, they collected and distributed 40 gifts.

The next year, her children asked if they could do it again.  And a movement began.

Now, 17 years later, people that Sari and her children don’t know call her and ask “When is the flames program starting.  I want to go shopping.” This year they will give away approximately 1,000 gifts.  The program takes over Sari’s life (and her house) from October to December.

This is a serious, big time model that anyone can follow.  Sari is clear on the basics:

Although all the donors and recipients remain anonymous, each “flame,”

Describes a specific person in a way that people can attach their heart to.

Connecting with other human beings is important for all involved.  We connect in different ways: through personal contact, through visuals, through words.  Sari’s Flames of Giving connects people that don’t know each other through gifts.

As Sari puts it,

The only thing I’ve ever seen make a difference is one person or a group of people getting together and taking their idea off the piece of paper and getting out there and moving it forward.

Ideas are useless.  It’s behaviors that make an impact.  Sari put her idea into action, first with just her children.  Then with other neighbors and agencies to help find people in need.

Give up control to multiply the impact

Sari is not completely in control of what’s happening, which is fine because she is convinced that, “Things happen for a reason.” Now gifts arrive at her doorstep and people arrive at her door and she has no idea where they came from.

Sari is not sure where to take this next.  She wants to spend some time thinking about it.

I’m hoping something will come to me and I’ll be brave enough to go for it.

She thinks it may be helping others start similar programs in other parts of the country and the world.

People are hesitant to do things on their own, but if I give them a little bit of guidance or structure, they take it and run with it.  I may need to pull myself out of the process and pull them into it.

Lessons for other leaders

If you need help, send Sari Gross an email at SSLB28@aol.com.  She’d be delighted to share her experience as an example for you to follow.