How Merkel Can Lead the Euro Zone Out of Crisis 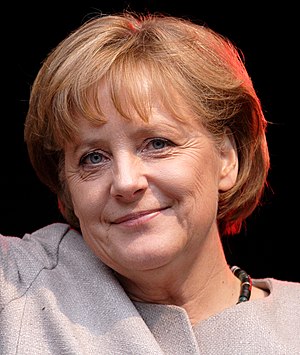 This is the moment for German Chancellor Angela Merkel to choose to take up the mantle of European leadership …or not.

It must be tempting for her to let things unfold as they might for the rest of Europe. She knows that many of the other 16 members of the euro zone are enduring and will endure a great deal of pain. And staying out of the fray is a way to delay pain in Germany.

But the euro zone’s pain will be Germany’s pain eventually. And it’s looking more and more like the later people take their medicine, the worse the pain will be in the end. A system built on a common currency without a corresponding common fiscal policy and tools is as untenable as four people driving a single car in which each person has their own steering wheel, attached to their own one of the four tires, trying to steer their own route.

The only long-term solution is to fix the system. Over the short term, it may be possible to coordinate actions across the different parties to increase liquidity, but over time, monetary and fiscal efforts must be aligned. The euro zone must either sever the monetary piece and go back to separate currencies or merge the fiscal piece.

So easy to say. So hard to do.

Everybody has an opinion. Some have multiple opinions. Reuters’ top two headlines yesterday morning were:

You can’t make up this stuff. Was Italy’s bond auction good news or bad news or both?

Back to Merkel. She has three options:

There are pros and cons to each.

Staying out of the fray

This is akin to the man on the deck of the Titanic who turns to his companion and says, “I’m glad the hole is not on our side of the boat.” Germany can stay out of the fray only so long. When Europe goes down, Germany will go down with it.

Chuck Forgang likes to say the contract side of his law practice is like scrambling and unscrambling eggs. He goes on to note that the scrambling is far easier than the unscrambling. Unscrambling the euro-denominated contracts will not be pretty. And, when the currencies are separated, it’s likely that some, like Germany’s, will go way up, choking their exports, and others will go way down, bankrupting a lot of people. None of this will be good for Germany.

The pain associated with transitioning to a fiscal union will be high. Many citizens will think giving up more control to a central system that has proved it doesn’t work is completely irrational. It is, however, the only option that has viability after the pain.

The time has come for Europe to take its medicine. Merkel is the only one in a position to make it happen. Let’s all hope she does.

This is a good example of step 5 of The New Leader’s Playbook, Embed a Burning Imperative.

The burning imperative is a sharply defined, intensely shared, and purposefully urgent understanding from each of the team members of what they are supposed to do, now.

For the euro zone leaders, the key is to make purposefully urgent choices.

They must start by being clear on their purpose. In theory, the euro zone was created because the well-being of the people of each individual nation would be enhanced by bonding together. If the leaders keep that purpose in mind, they will work through the short-term distractions on the way together. If they don’t keep that in mind, they will likely end up going their separate ways.

The clock is running down. The acceleration of news, events, downgrades and the like means that the leaders must make their choices with great urgency.

They must make real choices. As discussed above, their choices are going to have significant consequences and are not going to be easy. But as they weigh the different impacts on different people, they must keep in mind that choosing not to choose is itself a choice – and one with all sorts of unintended consequences.

The New Leader’s Playbook includes the 10 steps that executive onboarding group PrimeGenesis uses to help new leaders and their teams get done in 100-days what would normally take six to twelve months. George Bradt is PrimeGenesis’ managing director, and co-author of The New Leader’s 100-Day Action Plan (Wiley, 3rd edition 2011) and the iPad app New Leader Smart Tools. Follow him at @georgebradt or on YouTube.