Steve Jobs and the Power of a Passionate Focus 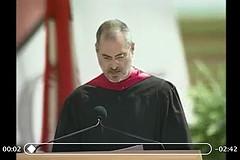 Focus.  This article is about the power of focus.  The key take away is the need to drive a message you are passionate about against as few points as possible, and ideally one main, overriding imperative. In this case, focus. Clear?

It’s a lesson reinforced by Steve Jobs, Bill Clinton, JK Rowling, and others.

In one way or another, all three points communicate the same thing: figure out what’s really important, what’s in your heart, in your imagination, your passion. Put all your energy into overcoming the obstacles you can, accepting the things you must, and connecting with those that matter. Focus.

As has been written about by a whole range of individuals in the week since Jobs’ death and felt by most of the people on the planet in one way or another, the man’s passionate focus on what he thought was really important changed the world for the better for all of us.

1992.  Bill Clinton is campaigning against the first George Bush. His lead is starting to slip. What does he do?  He returns to his three main campaign points “Change vs. more of the same. The economy, stupid. Don’t forget healthcare.” Of these, what is most remembered is “The economy, stupid.” That’s his focus because that’s what was most cared about. It’s a Maslow’s hierarchy sort of thing. If people can’t afford food and shelter, they can’t move on to the next things.  (Plus ca change….)

Whether or not you agree with his policies, you have to admire what Clinton was able to accomplish through the power of focus. Whether or not he really cared, he certainly made us believe he did.

In JK Rowling’s 2008 commencement speech at Harvard, she focused on two points:

It’s another great example of the same point – and well worth watching. When Rowling hit rock bottom, she stripped away everything else and focused on what she was most passionate about. Both her and Jobs imagined new worlds. Both made a huge impact.

All my learning as a leader myself, from working with leaders going into new roles, and from interviewing leaders for this column, makes me believe that

There is real power in focusing as much of your energy on the one thing you care most about.  Figure out what’s important.  Manage the distractions.  Focus.

Embed a Strong Burning Imperative is the pivotal step 6 of The New Leader’s Playbook.

It starts with you.  Make sure you’re focusing your own and your team’s efforts on the one most important imperative you are most passionate about.

George B. Bradt: An interview by Bob Morris »
PrimeGenesis > New Leader's Playbook > Team > Strategy > Steve Jobs and the Power of a Passionate Focus