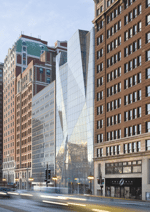 The Spertus Institute for Judaic Studies in Chicago faced a challenge. It was a wonderful place for people to come together to learn from each other and share perspective on Judaic history, culture and issues in lively discourse. But its building sent a different message. It said, “We’re special. Don’t even think about coming in here unless you’ve been invited.”

The good news was that the Institute owned a vacant lot next door to its building on Michigan Avenue in Chicago. The bad news was that it was right in the heart of an historic district, so it was severely limited in the renovations it could consider.

This was when it brought in the architecture firm Krueck + Sexton.

Ron Krueck took this project to heart and worked to find a way to make Spertus’ building more welcoming, while also appealing to the powers that controlled the historic district.

The new building changed the face of the Institute. Now it welcomes people in and communicates the organization’s values of openness, transparency and hospitality.

Iterating towards a vision

As Ron Krueck explained to me, getting to his vision of the building was an iterative process.

We started with several different materials because of the context,” Krueck said.  But they were getting in the way of the design.  So we evolved into a more and more glass building.  We started with something that was more undulating. The breakthrough was one morning when we were presenting some concepts of new composition. Because of the ease of making the models, we triangulated the curved surfaces…Howard came in and immediately said ‘that’s it’.

When we finally presented it, the historic board was enthusiastic. It didn’t want a mock historic building. It saw this as part of the continuum of the past, present and future of the district.

It’s about their vision, not yours

“Vision” is one of those overused words that means different things to different people.  Leaders are expected to have a vision.  Sometimes it’s not clear where they are supposed to get their visions from.

Ron Krueck needed a way to solve his client’s problem.  His vision did not come to him in a dream. Instead, he had to build it up step-by-step through a process of experimenting and failing, and then doing it all over again.

Don’t think your vision needs to come about instantaneously. Some visions need time and space to percolate. Perhaps most importantly, remember that the key is not the vision that you see as the leader, but the vision you help others see. Leadership is all about inspiring and enabling others. A compelling vision is a critical part of an inspiring imperative.

The burning imperative is a sharply defined, intensely shared, and purposefully urgent understanding from each of the team members of what they are “supposed to do, now.” Get this created and bought into early on—even if it’s only 90 percent right. You, and the team, will adjust and improve along the way