Which Way to Run? Lessons from 9/11 Choices 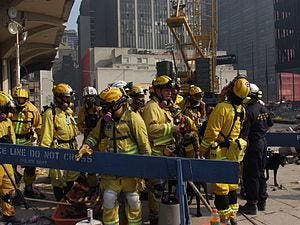 The fight or flight instinct is one of our most basic survival tools. Everyone was running on 9/11. Most ran away from trouble. The heroes ran toward it. And the leaders helped others run in the most appropriate direction.

Make no mistake about it. The first responders and their leaders displayed a selfless courage that most of us can only dream about. Our world is a better place because people like them existed and continue to exist. We desperately need fire, police, emergency medical, military and other personnel that will put themselves in harm’s way to protect others.

There were other leaders as well. Though they may have been unnoticed and unsung, they helped others in their flight away from danger. We need them just as much as we need those leading others into harm’s way.

And then there were those leading the leaders. New York Mayor Rudy Giuliani knew that people were going to watch what he did far more than they were going to listen to what he said. So he went down to the site. He calmed the panic. And then he followed up – relentlessly – attending hundreds of funerals for 9/11 victims. To be clear, Giuliani has his flaws and detractors. He is far from perfect – as are we all. But in a time of crisis and panic, he led by example and made a huge impact.  As he told Steve Forbes in a recent interview during which Rudy Giuliani recalls the first moments of September 11th, 2001:

I always had a firm rule that, as best I could, if I was going to have to make decisions about an emergency, I better go there, observe it, see it, then I’d know what advice to rely on and what advice not to….

I always try to calm down the overexcited people, because I think that emotion gets in the way of thinking.