There is a strong argument to be made that an organization’s culture is its only truly sustainable competitive advantage. Plans can be duplicated. People leave. Processes atrophy. Even patents expire. Cultures endure. 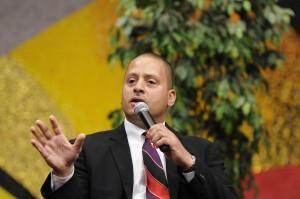 When Blair Taylor became CEO of the Los Angeles Urban League in 2005, he took over an organization with an 80-plus year history of success helping African-Americans and other minorities in Los Angeles achieve economic self-reliance, parity, power and civil rights. And he took over from John Mack, a strong leader who had led the League for 36 years. This was an organization whose behaviors, relationships, attitudes, values and environment were set – and working. (Follow this link for more on the BRAVE cultural framework from the new 3rd edition of The New Leader’s 100-Day Action Plan.)

But the world was changing and the League would need to change too if it was going to make the impact it needed to have on its community going forward. Taylor knew that the only possible path to success was for him to converge into the existing culture and evolve it by standing on the shoulders of the giants that had come before him.

Taylor spent a lot of time getting to know all the critical stakeholders. When he was done, he went back and spent more time getting to know them even better. As just one example, he continues to have lunch with one board member or community leader a week. There are 40 board members and literally dozens of community leaders. So when he completes the last lunch, he goes back and starts all over again, and again, and again.

From rescue to systemic change

The fundamental evolution Taylor is leading is from a rescuer model (primarily through training minorities for better jobs) to holistic, systemic change. Taylor is leading the Organization to go neighborhood by neighborhood and focus on improving five things: safety, education, health, employment, housing, with community engagement from the bottom-up as the backdrop for sustainable systemic change. Improving those betters the quality of life for the people in those neighborhoods.

It’s not just that the five things are interrelated. The challenge is that changing those five requires the work of a whole network of partner agencies. The League partners with something like 170 different agencies in its work. Each is important. Each is focused. All are stronger together than any is on its own.

Another challenge is that the communities are often wary of others trying to change them. Too many times they feel like they were duped by people coming in from the outside with a solution, implementing it, and then going away before it really took root. Too many times they saw through the hidden agendas of their “helpers” to take more than they give. And the communities have power. You don’t have to believe me. Just ask Walmart how it felt when Inglewood’s community leaders literally ran it out of town.

This is where the League’s history comes into play. Because the League has been a part of the communities for almost 90 years at this point, communities believe it will stick around. This gives the League the license to try. And then, as the results start with crime going down (safety), graduation rates improving  (education), healthcare improving, employment rising, and housing improving, the communities get behind the efforts. And that, of course, is the cultural change that Taylor and the Los Angeles Urban League are most excited about making.

What Taylor is doing that is so remarkable is the long-term approach he’s taking to two cultural changes simultaneously.

The New Leader’s Playbook includes the 10 steps that executive onboarding group PrimeGenesis uses to help new leaders and their teams get done in 100-days what would normally take six to twelve months. George Bradt is PrimeGenesis’ managing director, and co-author of The New Leader’s 100-Day Action Plan (Wiley, third edition). Follow him at @georgebradt or on YouTube

View More
« When you're in a hole, stop digging