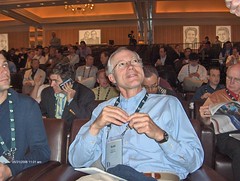 As Intuit CEO Brad Smith puts it, “Strategies alone don’t move mountains. Bulldozers do.”  Smith and former Intuit CEO Scott Cook were together on last week’s earning’s call.  That in itself is remarkable because Cook stepped down as CEO in 1994. Yet he’s still involved, passionate about the business and working everyday with a focus on “creating a solution where there has been not one .” (1)

Smith and Cook are together on Intuit’s value proposition as well. Their digital tax products have garnered higher Net Promoter Scores than their main competitors (tax stores) and are sold at a much lower price point (around 75 percent less). Creating a better solution is good. Delivering it less expensively is valuable. Recall, this was one of the main planks of Sam Martin’s efforts at A&P as well.

Smith and Cook are together on what their bulldozers need to do and how they need to do it. Smith’s full bulldozer quote is “Strategies alone don’t move mountains. Bulldozers do. And that’s where execution and a set of rigorous financial principles also come into play.” Strategy is theoretically elegant and practically useless until it becomes strategy in action.

Finally, Smith and Cook are together on the importance of agility. If you scan through what they’ve said through the years, it keeps reappearing:

“Leadership by experiment… (instead of) politics, persuasion, and PowerPoint” – Cook at Intuit’s leadership conference

Intuit has a clear, ongoing imperative to help people manage their financial lives and help them save time and be more productive doing so. That imperative is driven in sync by its original founder and current CEO. Now, just as Cook is letting Smith drive the main bulldozer, Smith is letting others drive their own bulldozers and experiment their way to success.

Make sure you’re getting the full lesson here about what makes for strong burning imperative. The best are:

Get your imperative in place. And then leverage it across your team and organization with the appropriate combination of relentless discipline and agile leadership.

The New Leader’s Playbook includes the 10 steps that executive onboarding group PrimeGenesis uses to help new leaders and their teams get done in 100-days what would normally take six to twelve months. George Bradt is PrimeGenesis’ managing director, and co-author of The New Leader’s 100-Day Action Plan (Wiley, third edition to be released fall 2011). Follow him at @georgebradt or on YouTube