What We Can Learn About Negotiating From the Great Compromiser

The chasm seems unbridgeable. While political parties exist partially to keep each other in check, at this point it looks like they are completely thwarting any progress. And progress is essential to keep things from collapsing like a house of cards. 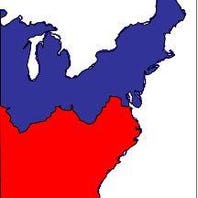 The parties have dug in at the extremes. One wants government to leave it alone so its constituents can do what they do best, build business and wealth leading to work and well-being for others. The other is called to help those that cannot help themselves, firmly believing that a government that will not take care of those that cannot help themselves is abrogating one of its fundamental responsibilities. Neither is prepared to give up anything.

In the middle is one man who understands the path that must be taken to find common ground between the two extremes. As he put it,

I know no South, no North, no East, no West to which I owe allegiance…The union sir, is my country.(1)

The chasm I’m referring to was the chasm between slave and free states. The man in the middle almost two centuries ago was Henry Clay, the American statesman who managed to construct both The Missouri Compromise of 1820 – bringing Maine into the union as a free state to balance the addition of Missouri as a slave state – and the Compromise of 1850 that kept the country from civil war. These helped him earn his reputation as “the great compromiser.” It’s not unreasonable to believe that Webster was thinking of Clay when he wrote one of his definitions of compromise as “to find a way between extremes.”

While Clay drove compromises on Capitol Hill, the steps he used to execute these deals can be applied to those agreements derived in C-suite boardrooms. Qualities of Clay’s approach to compromise are reflected in the six-step process featured in our book, “The New Leader’s 100-Day Action Plan.”

Clay was particularly good at identifying areas of agreement, finding acceptable alternatives and gaining agreement, yet ever mindful of James Russell Lowell’s admonition that:

Compromise makes a good umbrella, but a poor roof; it is temporary expedient, often wise in party politics, almost sure to be unwise in statesmanship.

Clay’s compromises did not hold over time. Despite everyone’s worst fears the house of cards did collapse into civil war. And it was far worse than anyone had imagined.

Remember, we’re all new leaders all the time. We’re continually engaging and re-engaging our colleagues to make things happen. As you do, make sure you understand all your stakeholders’ needs and concerns, so you can find your way between the extremes and keep your house of cards from collapsing into something that is far worse than anyone imagines.