Are Obama, Boehner, and Cantor going to follow their principles off the cliff? 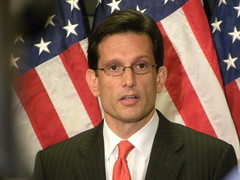 “A principle isn’t a principle unless it costs you something”

This is one of those quotes that are attributed to all sorts of different people. I heard it from Procter & Gamble’s VP of Advertising Bob Goldstein. Others attribute it to Bill Bernbach, one of the founders of the advertising agency DDB. Others attribute it, or a variation on it, to various people they admired along the way. Either way, we’re all making tradeoffs between what we want and what we’re willing to give up to get it.

We saw two very different examples of this over the past week.

Sheila Bair stuck by her principles even though it severely damaged her relationships with others. As Joe Nocera reports in a terrific article in The New York Times, Bair headed up the Federal Deposit Insurance Corporation during the recent financial meltdown. When Nocera asked her what was important, she replied “Our job is to protect bank customers, not banks.”

She lived by this principle every day in her job. She stood up to any and all comers, including a couple of secretaries of the treasury and other top politicians. Bair was always pushing them to protect the needs of the bank customers and taxpayers, not the banks, not the shareholders, not the bond holders and certainly not the investment banks. As Nocera reports, she would have let Bear Stearns fail to uphold her principles, “Guess what: Investment banks fail.”

Christian Lopez Gave Back a Gift He Didn’t Deserve

Yankee captain and shortstop Derek Jeter had a very good day last Saturday, going five for five and hitting a homerun for his 3,000th hit and then ending the day with a game-winning single. This is merely a milestone in a great career marked by resiliency and sticking with it – two very important characteristics and leadership skills.

Christian Lopez is a fan who attended the game. He ended up with the ball Jeter knocked out of the park for his 3,000 hit. When the Yankees asked what he wanted for the ball, he just gave it to Jeter. As he described it, “Mr. Jeter deserved it. I’m not gonna take it away from him.” He gave up real money to stick by his principle of doing the right thing.

Which Principles Matter Most?

Messrs. Obama, Boehner, Cantor, and others are wrestling with what imperatives and principles matter most:

The issue is that it’s hard to do everything at the same time. Assuming all the parties are trying to do the right thing, they still have different perspectives on which right thing is the most important. While Sheila Bair didn’t set out to make investment banks fail, she was prepared to pay that cost to protect bank depositors and taxpayers. While Christian Lopez would have liked to own a souvenir baseball, he was not going to take it away from the guy who deserved it.

The leaders of the U.S. government have not set out to default on the country’s debt. If refusing to sacrifice other principles leads to that happening, let’s just hope they understand the long-term cost of that to present and future generations. A principle isn’t a principle unless it costs you something. When that cost is another principle and the future well-being of an entire country, maybe some compromise is warranted.

An absolutely essential part of this is alignment around mission, vision, and values: what you have to get done; what things will look like when you get that done; and the principles you will not give up on along the way – no matter what it costs.

View More
« Onboarding is All We Do