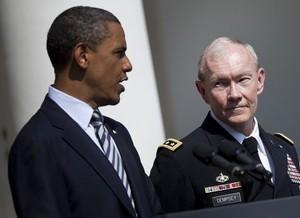 The man whom President Obama described as “One of our nation’s most respected and combat-tested generals” will no longer command any troops. In his role as Army Chief of Staff, the entire US Army obeys Martin Dempsey’s orders. But in his new role as Chairman of the Joint Chiefs of Staff, he will give up that command authority. Chairman is merely an advisory role. To be fair, this is about as good as it gets as far as advisory roles go in that he will be the president’s principal military advisor.

In this role, Dempsey will need to play up his leadership skills around influencing and put his decision-making skills on the back burner. Of course he’s the same person he was yesterday, but the context he’s operating in is different. Too many leaders fail in new roles because they fail to adjust to changing contexts. This is particularly challenging for someone moving from commanding to advising. Dempsey’s move is one example, but this is the situation faced by every CEO managing the transition to non-executive chairman.

Bryan Smith lays out a useful framework of persuasion in “The Fifth Discipline Fieldbook.”  He suggests five approaches:

TELL is what the combat commander issuing orders in the heat of battle does. There are no discussions.  The commander tells. Others obey.

SELL is used by someone trying to persuade someone else that their idea is right, as is

TEST is used by someone looking for a read on the viability of an idea before selling it.

CONSULT is about getting others to help improve an idea.

CO-CREATE happens when people start with a blank page and build the idea together.

In his new role, Dempsey gives up the ability to “Tell.”  On the one hand, he still has the other four levels of persuasion at his disposal. In his previous positions he most likely used a balance of those approaches. Even though he could, he didn’t always tell people what to do.

On the other hand, not having the ability to command changes the context of the other approaches.  You are going to be much more open to my selling, testing, consulting, and co-creating if you know I can turn around and tell you what to do if we can’t agree. Even when commanders advise, their advice is more equal than others.

In one sense, all leadership is political.  Yet Dempsey’s new role is much more political than anything he’s been used to – but not political in terms of party politics. As Dempsey’s predecessor, Michael Mullen put it in his May 23, 2008 address at the US Naval Academy, the role requires the “most independent military opinion—neither constrained nor contaminated by personal politics. Part of the deal we made when we joined up was to willingly subordinate our individual interests to the greater good of protecting national interests. The military as an institution must remain a neutral instrument of the state, no matter which party holds sway.”

Dempsey needs to be mindful of the order in which he influences people. Sometimes he’ll want to consult with the military commanders before going to Obama and his team. Then his advice to Obama will carry the weight of the full joint chiefs. Other times he’ll want to consult with Obama and his team before going to the military commanders. Then his “advice” will carry Obama’s weight. In these cases, even if Dempsey can’t command, he will be representing people who can.

And this is a good example of step 2 of The New Leader’s Playbook: Engage the Culture and Your New Colleagues in the Right Context