Tracking milestones is not a revolutionary business idea. However, the idea of using them as a team-building tool is new to most leaders and their teams. Royal Caribbean’s CEO, Richard Fain, fully appreciates the power of milestones and exemplifies how other leaders can utilize them to keep projects on track and recognize employee achievements.

Richard’s emphasis on milestones is not a surprise, as ship builders have been leveraging milestones’ emotional impact for millennia.  Ship builders celebrate “keel laying” as the formal start of construction, naming, stepping the mast (accompanied by placing coins under the mast for good luck), christening (accompanied by breaking a bottle of champagne over the bow), a whole range of trials, “sail away”, hand over, and my personal favorite – onboarding the new captain.

As Richard explained to me,

So what we tend to do is say we need to know where we’re going. We need to know what we expect to have at the end. And so we talk a lot about our end point rather than the waypoints.”

What Richard does particularly well is leverage milestones both as a way to keep big projects on track –  like building a ship, a new computer system, or a major marketing program –  and to keep smaller projects on track.  They also provide him with excuses to encourage all involved along the way. He goes to major events. He participates in new ship trials so he can experience the excitement of how the ship performs. Then he shares that excitement with others in his meetings, talks, videos, blog, and all forms of communication.

Richard talked about how “letting people know you care is of surpassing value” in an interview with Knowledge@Wharton. The links with his approach to milestones come through. He’s built a team of people that try to surpass – and he gives them milestones to beat. He knows that people value recognition – and he leverages milestone ceremonies to recognize their achievements whether it’s the first time people can actually walk on board and see a ship, or the first look at the prototype of a new computer system.

Royal Caribbean likes to build models so people can see and touch tangible things and know what they are going to do. They model staterooms, software, and marketing materials. When a project gets to a certain point, they give it a name. “It’s interesting how giving that project a name galvanizes people around it – because it makes it more tangible to them.”

One of its big projects was the creation of a central gathering area on the ship “Oasis of the Seas.” This area – which is aptly named Central Park — is located in the middle of the ship and opens to the sky for five decks. To celebrate the design, it created a full-size model of part of this open space in the massive hangar-like building where parts of the ship were being built in Finland.   Also, the company treated the whole team to an alfresco fine dining experience so they could celebrate the space. 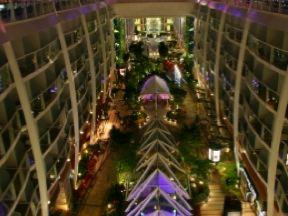 “It was a magical evening …We were having a lovely cruise dinner in Finland (in early Spring – when it’s still cold outside)… It made us all realize how special the space would be and that it was worthy of the effort to really make sure that not only was the overall space good, but that all the details were perfect.”

Once they know you care, then you can challenge them. As Fain said in a recent interview with Adam Bryant for the New York Times, “My experience is that people love to be challenged. If the challenge is reasonable, or even slightly unreasonable, they love it and they rise to the occasion. There’s just no question. People love to be challenged and they love to show off their skills and talents.”  Aggressive, but doable milestones create just such a challenge.

Establish a Process to Track Milestones

Compiling milestones is a waste of time if you do not have an efficient, effective and clear process in place to track them – and avoid the “next week” syndrome.

Define them and begin tracking and managing to them immediately. Use the process to establish and reinforce expected team norms.

This is a good example of step 7 of The New Leader’s Playbook: Exploit Key Milestones to Drive Team Performance

The milestone tool is straightforward and focuses on mapping and tracking and what is getting done by when by whom. High-performing team leaders take that basic tool to a whole new level, exploiting it to inspire and enable people to work together as a team!