Generating Ideas with the Atom Accelerator in Your Head

My brain is getting bombarded with ideas from all sorts of different directions.  I thrive on this and am constantly looking for ways to feed more stuff into the mix.  This week was particularly fruitful as I got new stuff from: 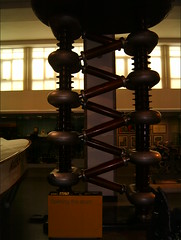 Some of this week's idea germs include the power of creative briefs, laddering up to feelings, and flipping the perspective.

The Power of Creative Briefs

Forget the label.  What's important is getting a head start by thinking things through in advance.  Before you do anything, before you try to communicate anything, get clear on what you're trying to accomplish and the choices that should direct your actions or others actions.  See the note on What Choices Direct Actions for more on this.

Things Norb Vonnegut, Richard Fain, Charley Shimanski, and the gang at Stern + Associates did and said this week reinforced for me the importance of creative briefs (or whatever you call them).

Ladder Up to Feelings

Charley Shimanski and Richard Fain are far more focused on how they make people feel than what they actually say to them.

Steve Jobs' product introductions are justifiably legendary because anyone involved in them in any way knows that they are touching someone who has changed and continues to change the world.  (If you want some examples of how to wow, re-look at the videos of the original Macintosh computer introducing its "father" in 1984 or Steve's introduction of the original iphone.)

I've had a couple of situations this week where I or someone else stopped and looked at things in different ways.  There's real power in asking questions like "What if?", "Why not…?", and "How might we…?"  You know where this one's going.

Bottom line, make sure you're opening your own atom accelerators to new materials, wherever you can find them.  You've got more seeds of ideas in your head than you know.  Most won't turn into anything useful.  But some will.

Altering Balance of Consequences: An Essential Part of Transition Management »
PrimeGenesis > Leadership Skills > Generating Ideas with the Atom Accelerator in Your Head