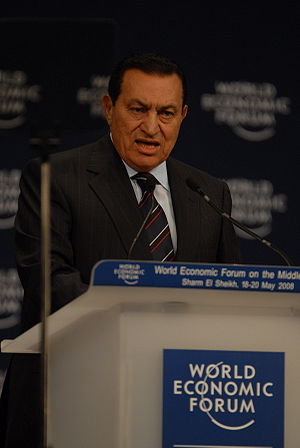 Following a dictator like Egypt’s Hosni Mubarak is a particularly challenging task.  Dictators substitute personality-driven command and control for strategic and organizational processes.  You don’t need strategic planning if you’re going to do everything the dictator’s way.  You don’t need systemic talent reviews and succession planning if there’s only one opinion that matters.

The challenge for both political and business leaders who follow an autocratic leader is to substitute strategic and organizational leadership skills for individual personality.

A dictatorship is the ultimate in command and control.  Different dictators through the years have taken different routes to get to the top.  Some were elected (like Hitler).  Some inherited the job (like Kim Jong-un in North Korea).  Some took over in military coups.  Some evolved into the job.

Not all dictators are evil.  Benevolent dictators try to do the right thing for the people they are making choices for.  Even despotic dictators like Rafael Trujillo in the Dominican Republic created tremendous economic growth, and huge progress in healthcare, education, and transportation.

Furthermore, living and working under a dictatorship may not be such a bad thing.  Barry Schwartz argues that “choice has made us not freer but more paralyzed, not happier but more dissatisfied.”  (See his argument in his TED talk on the Paradox of Choice.)  Dan Gilbert suggests that people are actually happier if they do not get what they think they want.  (See his counter-intuitive argument in his TED talk on Why are We Happy.)  Thus, people getting told what to do and being deprived of some things may be happier than people living in “freedom”.

The Aftermath of Autocratic Leadership

One issue is that a system built around personality-driven command and control collapses when the personality goes away.

There’s short-term disruption during the actual transition and the inevitable jockeying for power.  Hopefully the Egyptian military can minimize this disruption between now and the elections.

Over the mid-term, things work okay because people are used to executing.  Even though people in a dictatorship have not developed their strategic and organizational skills, they have finely developed operating skills.  They get done what they’re told to get done because the consequences of not getting them done are severe.

Over the long-term things don’t work well.  The current generation has not been allowed to think on their own.  So it’s hard for them to do so until they develop those skills.

Joaquin Belaguer took over leadership of the Dominican Republic after the assassination of Rafael Trujillo.  But Joaquin’s long-term vision couldn’t survive the jockeying for power and he was ousted in a military coup a year later.  (He was able to come back even later and shepherd many important reforms.)

T. Vincent Learson took over leadership of IBM after the death of Thomas Watson Jr. ended his and his father’s 60-year control of that company.  “What’s this?” you ask.  “I thought we were talking about political dictators.”  Don’t kid yourself.  It’s just as hard to follow a business dictator as a political one.  The issues are the same in that they may have substituted personality-driven command and control for strategic and organizational systems.  In the early 1980’s a lot of people at The Walt Disney Companies were still making decisions by asking “What would Walt do?” even though Walt had been dead for over 15 years.

How to succeed following a dictator

Successfully following a dictator requires walking a razor’s edge as you prepare in advance, manage the message, and build the team.

They key here is building cross-factional and extra-factional alliances.  Whichever faction you’re a part of, you need to reach out to leaders of the other factions.  It’s not so important that they agree with everything you think as that they believe that you will be fair and hear them out.  Additionally, if you can bring in some powerful allies outside of the organization, you’ll be in even better shape.  Think about other nations politically or key customers, suppliers and allies in a business.

Having started to build those alliances in advance, your message needs to focus on empowerment and collaboration.  Whether it’s right or wrong, there will be a backlash against command and control.  If you don’t go with that pendulum swing, you’ll get knocked over by it.  You can help guide the pendulum back to a middle way later, but relax the constraints at first.

Beyond getting the right people in the right roles with the right support early on, you have to invest in building strategic and organizational skills quickly.  If you can survive the short-term jockeying for position, use the mid-term operational honeymoon to accelerate the development of those longer-term planning skills.  The future will be here sooner than you expect.